How Do We Get Promoted? 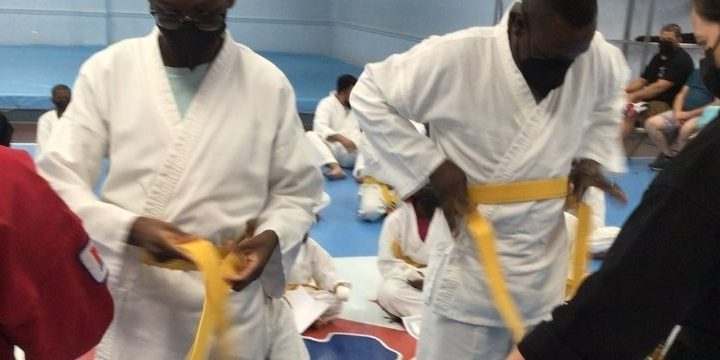 Being Promoted at Karate International – it’s about much more than you think!

We plan the striping system and the techniques to help students get to their goals in the amount of time they have before their next promotion. We also heavily reward them with stripes for their first and second belt, but spread them out a little bit at a time to teach them that rewards are great but the achievement itself can become the reward. This is not a concept that children, or most people in general understand. So, it is our job to help them discover rewards in the beginning and learn that they can create their own rewards!

One of the hardest part of being a parent or adult student in our dojo is to understand the differences from one person to the next. All we ask, is that you trust that by the time you our your child get to Black Belt, you will have all of our respect and you will respect all those who came before you and will come after you. If you like what you see in our Black Belts, then trust us to build you or your child up to that goal.

Sometimes we need to remind our students that they may not have any idea of the journey the other student has taken. There may be green belts in the class that don’t look that much better, than lower rank belts in the same class. Maybe those green belts are just starting back in classes after 1.5 years away from Karate, due to the pandemic. Or, maybe their invisible challenges are not apparent to you. We have students on the Autism Spectrum, students who have visual challenges, students who have mental health issues and students who have just had a really bad day and are struggling to pay attention in class.

All of our students are individuals and our instructors are trained to help them achieve their goals to the best of their ability. It is a journey and as any of our Black Belts will tell you, the journey is wonderful at times and difficult at times.

Our promotion ceremonies are every two months. Most new students need eight weeks to complete the requirements for their first belt, the gold belt. After that most students again need about two months to get to their next belt. After the first two belts, the time increases between belts. By the time you are a brown belt working on black belt, you have learned that the time between belts is necessary and that you can always improve.

You would also have learned that not everything in the martial arts is about a reward. By the time you reach black belt you will learn that the martial arts in general are a challenge and it can be a life long journey.

This premise carries through to school achievements and careers. The confidence you build by setting and achieving goals in the martial arts will benefit all students in other aspects of life. To hear more about this from the parent’s perspective, read more in this Guest Blog, from a parent who has had her three children at Karate International from 3 years of age through to College.