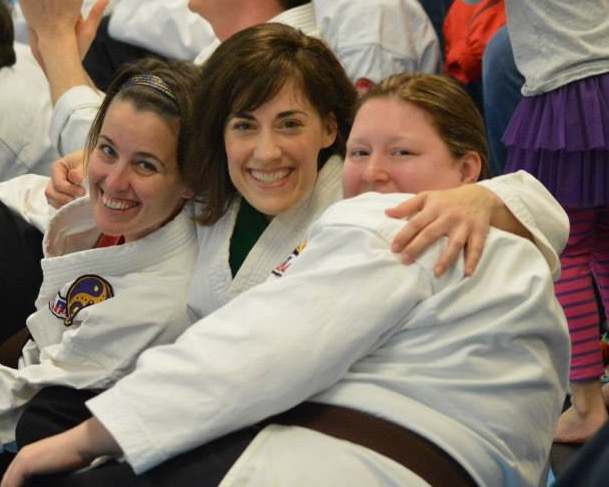 Jen was angry at her body for betraying her with Cancer

Around Thanksgiving in 2009, some numbness on the right side of her body led Jen Spragins to her doctor. The next day, she was in the hospital having a walnut sized brain tumor removed from the lining of her brain. She later went through chemo, radiation and recuperation.

Jen walked in to Karate International of West Raleigh in 2010, just a year after her surgery for a cancerous brain tumor. When I asked her about her reason for choosing Karate, she said she wanted to feel strong and confident after having gone through this medical crisis. She walked by the dojo one day, on the way to the grocery store and in that moment she took her first step on the journey to Black Belt. Jen said from the first day she walked in, Mr. Chester Rowe made her feel comfortable.

Jen said overall that she wanted to feel strong again. “After cancer, I really felt that my body betrayed me”. She also said she was angry at her cancer and she wanted something that would let her get rid of that anger. She went on to say that because she lost her hair, she “didn’t feel like a girl or a person”. Just going in the dojo, she told Mr. Rowe, “I am going to have to wear something on my head” and he was okay with it so she felt that maybe this was the thing that would make her feel courageous and confident again.

By the time she started Karate, she was back in the workforce and putting time into karate was hard. She attended two to three times a week in the first two years and moved to four times a week closer to Black Belt. Her biggest obstacle was comparing herself to other people. She thought some of the other students were just progressing faster. “Mr. Rowe told me more than once that you are on your own Journey.” Jen says eventually she learned her biggest lesson which was to just keep coming back to class.

Jen, who turned 40 this year, has found friendships in her Karate classes as well as inspiration in other adults that came before her in the classes. Having the other women in the class with her made it a more full experience. She recalled that those relationships became her friendships outside of the dojo as well. Her friend Jen Aimone is the karate technician and totally gets that aspect of the arts. Melanie Moran seems to be more proficient in the flow of the katas. Jen prefers sparring. She says she never feared sparring, but she had times when she felt very challenged when she sparred with men, when she was around the Green Belt level. She said she didn’t feel scared, she just felt that she had so much to learn.

She said when she was sparring, she felt strong. Even if she did not win in a sparring match, she thought “what other woman is out here trying to punch someone”. Jen said she was angry at her cancer and the sparring gave her the best outlet for working through the anger.   She also found the spirituality that she needed in her life.   “There are the things you learn about, like perseverance and the other principles in the dojo. Then you start to live those concepts.” Jen knows she is always better when she comes back from a karate class.

Jen has found her inspirations in many people in the dojo. “Ms. Melissa Bauguss is one of our teachers and she inspires me now.” Mrs. Amanda Rowe inspired her when Jen was in her early days in Karate. Jen says, when Amanda was testing for Black Belt, “something flipped in her and she turned into something amazing.” Jen expressed that she did not think she could be a Black Belt at first.   “But Mrs. Rowe was so phenomenal when she was testing. She looked so polished and fierce when she was testing for Black Belt and she had not started out that way.” Jen decided if Amanda Rowe could make that transition and get to look like that, then Jen could do it too. Jen Spragins made it to Black Belt in January of 2015.